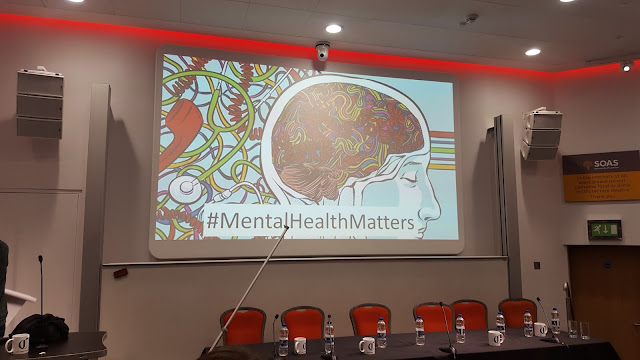 Consented UK are "a multi-media platform for those who aren’t accurately represented by the mainstream." They are a platform I hadn't heard about prior to finding out about this event they were holding on the subject of Mental Health, but I've developed a huge respect for the work they do and the conversations they create a space for both online and in the physical world. Not to mention their absolutely fantastic Online Library of informative literature. I found this event simply through it popping up as a suggestion on Facebook, and I'm glad I was able to go as the event sold out quickly.

The workshop was held at SOAS (the School of Oriental and African Studies) here in London, and featured a set of interactive discussions on various topics regarding mental health, but a) from the perspective of a variety of social groups (ethnic minorities, immigrants, LGBTQ+ people, men, women etc.) and b) with an understanding of the role capitalism plays in the general mental health of the population. How unhealthy practices for our mental health like extra-long work shifts, suppressing emotions, prioritizing work over health and avid consumerism are popularized, and the way that things that are meant to benefit our mental health are also commercialized and often made inaccessible to those without the funds to buy into weekly yoga classes or shelves full of books about health fads, spa treatments, and even the popularization of my precious love: Mindfulness.


We started off with an introductory talk by a co-founder of Consented Amit Singh about mental health and capitalism, including the staggering statistics that 1 in 4 adults are currently suffering from some form of mental health problem, and that a quarter of a million children are currently seeking help for mental health related problems. So many of us are suffering, and yet ashamed to let others know at the same time because of that stigma.
He talked about the concept of the "Western Ego" this idea we have that the world revolves around us, and if bad things happen they were bound to because these things only go wrong for us. The argument was that living in a capitalist society that favours egotism, envy, and competition forces us to be quite inwardly focused and spend time in our own heads dwelling on negativity. Unhappy people make for fantastic consumers, because we buy things in order to make us happy, and so the system reinforces this oppressive cycle in order to continue functioning.

The session on racism and mental health actually hit me quite hard. The whole time we were talking I felt this bubbling pressure of frustration sitting in the pit of my stomach. I wanted to cry, to scream, to shout that it's not fair. For my readers that aren't BAME (black and minority ethnic) people, I need you to understand: I feel that bubbling frustration every time I see a black man killed by police on the news, every time my blackness is challenged, every time someone wants to tell me why blackface is okay for Halloween or cosplay, every microaggression, every time my hair gets touched without asking.

In this session, we talked about that frustration, how it manifests in different ways for black people, and how that can very easily lead to mental health problems. We talked about how one prepares for a job application or interview, and the responses that came back were less about reading up on the company or updating your CV, but about minding the kind of hair you wear, tailoring your CV to remove any black-focused activism or community work, never putting any illnesses or mental health problems, not wanting to fit into stereotypes like the "angry black woman" when really you're just standing up for yourself. One gentleman spoke about his father changing his name to anglicize it more and help with job prospects.

We talked about black people and our relationship with the police, that fear of the people who are supposed to be protecting us, and disproportionate police reactions with regards to different areas of London. All of these things lead back to thoughts of being afraid, feeling trapped, feeling less-than, and, as Chama said in the workshop, "having to dismantle the self in order to eat, pay bills..."

When you are constantly pulling apart who you are, suppressing yourself because you know it makes people uncomfortable, the side-effects of this constant struggle will be stress, anxiety, depression, dissociative disorders, maybe even suicidal thoughts. However, often when we reach out about feeling oppressed we're met with dismissal by people who can't see things from our perspective, only exacerbating those feelings. All in all, a really powerful talk that hit hard. Chama and Nicole also provided a list of mental health resources, a lot of which are BAME-centric but not exclusive, which I have added to my Google Drive should you want to have a look.

Next, I will be discussing the incredible talk on self-care as run by Dorett Jones and the final Q&A! If what I discussed interested you at all make sure to follow the relevant people on twitter: