The second workshop I went to centred around one of my favourite subjects - Self Care. The workshop was run by Dorett Jones and started off by just asking those of us in the audience what the phrase "self-care" meant to them. Some of my favourite answers were:

One of the main points of the entire conversation was the idea that self-care, when you get down to it, is a very personal and subjective activity. One person talked about alone time and the act of just doing nothing. for her, it's a chance to recharge but it's perceived by others as laziness. We looked at the kind of things one commonly associates with self-care in 2016, and how it's become this trendy concept and catchphrase, something to be marketed rather than something necessary for our mental health.

This workshop had an impact on the way I think about this blog, in fact, because so many of the trendy self-care techniques are things that I promote: Yoga, Meditation, Mindfulness, a Pinterest-ready self-care jar, going to the gym, and healthy eating. I can often operate within this bubble of what my position of privilege in society allows me and those around me to afford. I'm working on a blog post about a recent spa treatment, for heaven's sake.

For a lot of people, these things just aren't accessible. Maybe they take place in spaces that not all people can feel comfortable, maybe people just don't have the time to take out of their day for meditation. Maybe your mental illness is severe enough that these things won't make the impact you need, or maybe you're under the care of others, or maybe these things just do not work for you. Maybe thinking about all these self-care techniques as things you're supposed to be doing becomes another source of pressure, another source of anxiety and stress.

This isn't to say that what I talk about doesn't work for anyone. One of our exercises in the workshop was to write down something we do for self-care, give in the pieces of paper with that thing written on it, and take someone else's to "try on" their sort of self-care. I put down meditation and return I got: 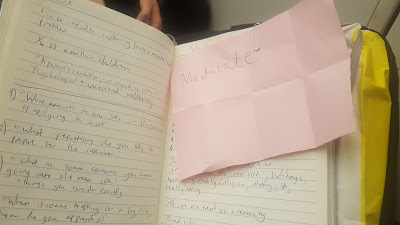 "Your self-care has to be related to how you're walking."
This was one of the things that Dorett said which stuck out to me the most. Self-care is something that needs to be directly related to yourself, your personality, your way of living, your privileges and your limitations. I feel like I try to present options in my advice and ideas, but this talk really inspired me to think outside of my bubble more and explore the concept of self-care further with you all. 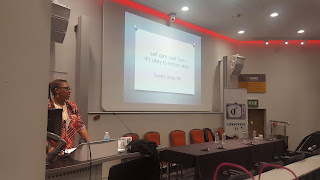 Finally, there was also the highly inspirational  idea of self-care being a radical act in and of itself. Just like the Audre Lorde quote in our opening image suggests, if we face daily techniques to reduce our confidence in ourselves, diminish us, and end up in situations where we are forced to dismantle our concept of self - self-care is a giant middle finger to that idea. It's activism, it's punk rock, it is self-preservation and setting boundaries, and most importantly it is yours to shape as you wish.

At the end of the session, all of the day's speakers sat down to answer questions from the audience and have a more general discussion about the subject of mental health. It was great to listen to everyone's opinions and ideas about how mental health is treated in this country today, and options for the future. I'll go through and talk briefly about some points that really stood out to me.

That's actually the point I want to end on, because that's exactly what Consented provided for us by creating this and all of their events: spaces designed for having these conversations, and help for those seeking out organisations that can provide the help that they need, or maybe even inspiring people to create their own.


If any of what was spoken about in these write-ups is something you find interesting or want to know more about, please check out the twitters of all involved, and definitely consider going to one of Consented's future events.
Dorett Jones: @JonesyV08
Ray Filar: @RayFilar (Did the talk on Mental Heath and Capitalism which I missed out on)
Chama Kay: @Chama_kay
Nicole Crentsil: @NKrystal
Amit Singh: @asingh11189
Mike Pope: @mikepopeonline
Consented: