Steven Universe is one of my favourite pieces of television. I think it's inspired, I think it's beautifully drawn, and it tackles lofty subjects delicately enough for children to absorb and process, but obviously enough for it to resonate with adults. In some of its more recent episodes it's actually tackled the subject of mental health head on, more specifically anxiety and how it affects our relationships with ourselves and others.


The episode "Kiki's Pizza Delivery Service" in season 3 was all about the stress of being overworked, how some people have anxiety around the idea of saying no to people, fear of failure, fear of letting other's down, and the negative impact of bottling up emotions vs. how facing your fears and creating boundaries can be an act of self-care, all of this packaged in the character development of a young, black woman (my speculation is that the family is Ghanaian, simply because the dad's name is Kofi).


The episode talks about the importance of self-care, all the while giving an alternative spin on what black womanhood looks like in modern media. Not all of us are confident, and minority mental illness is real and frighteningly overlooked both in and outside of our own communities. I wonder how many introverted little black kids are growing up seeing themselves in Kiki, and seeing how important it is to look after themselves.

I want to talk more in depth, however, about an episode from the most recent season entitled "Mindful Education". If you know me or this blog well enough, I'm sure you know I fell in love with the title right away. However, I was expecting it to be some sort of pun, and not an actual episode dedicated to some of the ideas presented in mindfulness like meditation and allowing yourself to feel exactly what you're feeling in the present moment. I was stunned by how honest it was, how beautifully it illustrated what internal turmoil looks like and how we fall apart when we can't stop fighting within ourselves. Literal butterflies depicting that feeling of fear and panic, and how it can grow exponentially until it overwhelms.


I got emotional watching it, because I wish something like this had been available to me when I was younger. 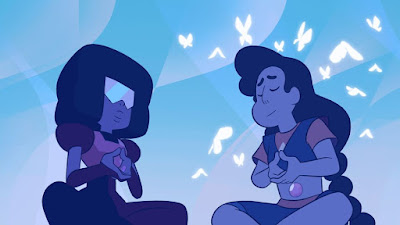 When I was a teenager, I owned a book called The Boy with the Thorn in His Side, titled after the song by The Smiths. It was written by Pete Wentz, bassist of the band Fall out Boy, and in it he describes this feeling of what I can only assume was anxiety or panic. He described it as a feeling like "bird beaks and teeth", and that resonated me because it described exactly what I was feeling regularly at school and at home. It made me feel like I wasn't alone, wasn't exaggerating, and that this thing that made me feel like throwing up on the bus ride to school had some kind of name. I read that book countless times, because it made me feel like I was understood somehow..


This episode made me emotional because it made me happy. I got the feeling it's going to give sad, panicky kids like me solace in the fact that the characters they love on TV really understand how they're feeling, and not only that but they've been given tools to deal with those feelings that they might never be taught any other way.


Some schools, in recent years, have integrated mindfulness into their routines for younger children to see how meditation can improve focus and enjoyment in school. But even if you think the idea of children meditating is a silly one, there's still something to be said for teaching children to be comfortable with their own feelings, to take time out and feel sad, afraid, frustrated, and to understand what bad feelings are so they can grow as human beings.


It's not always easy to teach these slow processes to children, they want things quickly and to be immediately satisfied. But if the art they consume holds the same messages, from cartoons to film to music and anything else, the work becomes easier for the older people in their lives. And let's not forget all the older people that watch this show and feel that same resonance, that can see something they might deal with so regularly described in such an honest and beautiful way. I'm really grateful to Steven Universe, the writers and artists and everyone who comes together to create such an important show. They're doing good work.


Take a moment to think of just / Flexibility, love, and trust.