Any of the quotations I use in this post will be from the book I did the majority of my research with. It has the very succinct and completely easy to remember title: "Overcoming depersonalization & feelings of unreality - A self-help guide using Cognitive Behavioural Techniques."

Depersonalization, derealisation or dissociation are all terms for a similar phenomenon that can be triggered by intense stress or fear, and is also a symptom of many mental illnesses like depression, OCD, anxiety disorders, agoraphobia, or bipolar disorder to name a few. This is not the same as a complete loss of reality, as someone with a form of psychosis would experience, but a feeling of being separate from reality, floating above it or standing to the side of it. It is also not the same as full-blown delusions or hallucination, because the person afflicted is still aware of the fact that these happenings are abnormal. It's not something that can normally be observed from the outside, as no physical symptoms are ever really displayed.


The definition from the American handbook of Psychiatric conditions (version iv 1994) is as follows:


"An alteration in the perception or experience of the self so that one feels detached from, and as if one is an outside observer of one's mental processes or body (e.g. Feeling like one is in a dream)"

Extensive research has helped to debunk some misconceptions about the disorder, for example it was once thought that depersonalisation was a precursor to psychosis. However, this is not the case and while there are rare cases there is no proven correlation between the two.

It has also helped to identify some high-stress situations that would lead to something like depersonalization or a feeling of unreality, but are not necessarily indicative of other mental health problems. Bereavement, neurological conditions like migraines or epilepsy, severe stress, and even jet lag can all trigger depersonalization in some people.

How does it feel?

"To the depersonalized individual the world appears strange, peculiar, foreign, dream-like. Objects appear at times strangely diminished in size, at times flat. Sounds appear to come from a distance. The tactile characteristics of objects likewise seem strangely altered ... Patients complain that they are capable of experiencing neither pain nor pleasure; love and hate have perished with them...the climax is reached with their complaints that they have become strangers to themselves. It is as though they were dead, lifeless, automatons..."

Audio Journaling - for those who have difficulty writing down their thoughts

It's funny, I was always told as a child that talking to yourself is the "first sign of madness". The only thing that stops me going mad sometimes is going out for a walk and having a good old talk with myself. I do this on days where I feel frustrated for one reason or another. Being able to exert physical energy by walking as well as talk out loud to get my thoughts out of the jumbled confines of my mind is almost a form of meditation. Walking and talking forces me to regulate my breathing, and gets the thoughts out of my head that I find myself most frustrated with. When trapped in our minds, our thoughts can become warped and blown up out of all proportion, but getting them out into the real world makes them easier to decipher critically.

What I've begun to do in the past few months is tie this meditative exercise in with journaling through the use of my mobile phone's recording app.

The idea actually came from a character flaw of mine: an inability to articulate myself properly in an confrontation. In a part relationship of mine I would air out my grievances with my partner by talking to myself but got tongue tied when the time came to say those things to him. To combat this, I started recording my rants and then writing down the things that I really wanted to say, so that when the time came I would have the words I needed to hand. It didn't always work, but I did find that it helped me gain perspective on a lot of my thoughts and feelings.


When I go for a walk and talk to myself, I'll use my mobile phone as a prop, so it looks as though I'm speaking to someone and people don't start throwing holy water at me. It's a lot to go through for a simple meditation, but it helps clear my mind in such a complete way that it's more than worth it. Since I'm using my phone as a prop anyway, I thought I might as well put it to good use and record what it is I'm saying.


The purpose of journaling is to provide that same cathartic experience. It's also for recording progress and just measuring where you're at in life currently. With talking you get the catharsis but lose the ability to look back on your progress and pitfalls. Recording your words gives you all of that back, in a format that may be easier for people that find it harder to get their thoughts out on paper, or have issues with racing thoughts and find speaking easier than writing in those moments. You don't have to combine it with a walk like me, but I'd challenge you all to at least try audio journaling if the written method hasn't worked for you. I've devised a simple plan for anyone who has trouble sleeping to try creating their own audio sleep journal. Use the picture below as a guide and let me know how it goes! 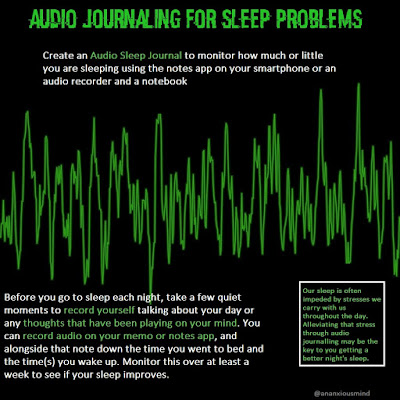