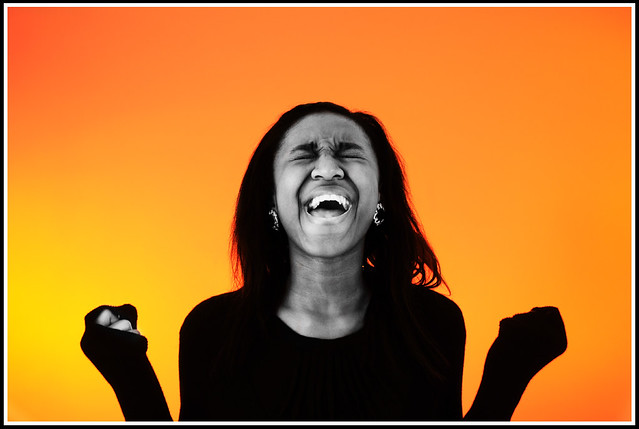 I'm having a pretty awful day today, if I'm honest. I'm angry. Lots of things are happening around me that I can't control and it feels frustrating. I feel jittery and can't sit still and keep running the problems over and over in my mind which makes me angrier and angrier.

I've talked before about the problems that come with Mental Health and Self-care turning into trendy buzzwords that people latch onto on the internet. One thing I mentioned throughout but didn't hone in on was that mental health advice that's actually valuable is often left to the wayside, with things that enhance the idea of a "positive" lifestyle are pushed forward because they fit with the aesthetic.

I've said before that I love mindfulness, and that it's helped immensely with my anxiety. I recently attended a whole host of talks on the subject at mental health at the recent Mental Wealth festival hosted by City Lit here in London, and one of my favourites of the day was on the subject of Anxiety and Panic Attacks, run by NHS Director Mandy Stevens. In it she did talk about the benefits of mindfulness, her experiences with anxiety and lots of tips and tricks for managing it on a daily basis. One of the most important parts of that conversation was on the subject of avoidance.


How the two of these things link together, is that I often think a lot of mental health ideas that get posited online preach avoidance as a form of self-care, when sometimes that is the least healthy thing a person can do. I have a big problem with avoidance personally, especially when my mental health is shaky. It's much easier to back away from the things that are causing or exacerbating my low mood and anxiety than it is to face them. Even if I pull myself out of an anxiety-inducing situation because it's genuinely bad for me, I will do anything to avoid the emotions I'm feeling. I'll sleep, I'll walk, I'll aggressively shelve books at work or listen to podcasts so I can divert my thoughts. The problem with this is that these emotions have nowhere to go. As one of my favourite bloggers HeyFranHey always says "Emotions are Energy in Motion", and if the nervous, sad, or angry energy in our bodies has nowhere to move to it builds, and festers, and slowly but eventually overwhelms us when we least expect it.

Part of what fuels anxiety is the fear of feelings in general. We catastrophise our feelings, convince ourselves that if we feel too much sadness or anger or fear that we'll die. Avoidance fuels that fear, and through that it fuels anxiety. Once you allow yourself to feel, which by the way is absolutely frightening and not something you can always just do, suddenly you've proven the voice in your head wrong because you haven't died at all. Eventually, that can help us liberate ourselves from that voice altogether.

Have you ever gone through a break-up from a romantic relationship, and told yourself to "keep busy" as a way of getting over it? It's not bad advice, but it ignores the part where you allow yourself to feel the feelings that this massive change in your life have brought up. You're supposed to cry, to get angry, punch pillows, reminisce and even complain. After you've done that, it's time to work on giving yourself things to do so you don't become trapped in those negative emotions.

The idea that mental health means perpetual happiness is not only impossible, it's unhealthy. Think about it in the sense of physical health: if you never get sick your immune system can't build resilience, so at the first sign of illness your body suffers with more intensity.

There are plenty of reasons to be angry these days. Personal reasons, political reasons, economic reasons, and so much more. It's important to know that you're allowed to feel it, let it burn through your body, and then let it pass. Meditation or drinking water or going for long scenic walks are things to do after you've allowed yourself to feel the emotion. If not, you just end up pushing it further and further down until you explode.

This world mental health day my advice is to feel the things you're feeling right now. Let them wash over you but not consume you. Cry if you need to, get really intensely angry. and do whatever it takes to open up that emotional wall. Being angry is important, today of all days, because it's healthy.
Labels: #WorldMentalHealthDay #WorldMentalHealthDay2017 anger anxiety Avoidance emotions low mood Mental Health World Mental Health Day