Panic Attacks and Me: Meditation gives me resilience


Recently I had a pretty awful mental health week, culminating in two panic attacks within a couple of days of each other. I became so anxious about having the next one that I would ruminate n the feelings and how awful they were and couldn't properly recover before the next one. Panic attacks, I believe, hit everyone a little bit differently but for me it starts with my thoughts being so loud and erratic that it starts to affect my vision, then my heart rate speeds up, my chest feels tight like I can’t breathe, and there’s this seemingly untraceable feeling of fear at impending doom that feels like it’s sitting right under my skin at all times, threatening to bubble over.

I believe this has all been caused by months of small stresses building up over time, combined with me falling out of a lot of my self-care routines. I’ve been doing nothing to mitigate damage caused by small amounts of stress over time, and finally my body is telling me that it’s reached a limit. So at the moment I’m focused on regaining my balance, and my long-term goal is to get to a point where the things I do to keep myself in balance come as naturally as breathing. In the same way that some people need to take medication on a tight schedule for their mental health, I’m now realising there are things I must do regularly too. I’m going to talk about each one in a series of posts, and the first one up is meditation.

Until recently I had not meditated or even allowed myself to be in silence for more than a few minutes. I’m always watching something, listening to something, or doing something right up until the moment I go to bed. Silence allows you to listen to what’s going on in your mind, and if that’s a lot of negative or confusing thoughts then it can be much easier to drown those thoughts out with constant mild distractions. Even as I’m writing this post I’ve got things on in the background, and although I can work without it I hate doing it because I struggle with racing thoughts almost constantly.

Guided meditation is useful for me because it allows me to take a moment out of my day to work on organizing my thoughts and existing peacefully, but I can use the voice as an anchor to stop my thoughts racing quite so much. I downloaded the Calm app again the day after recovering from an intense, sudden moment of panic that particularly frightened. I had used it in the past, as well as the more well-known Headspace, but fell out of the habit with both.

I decided I would use their daily calm meditations either before bed or in the morning before work over the course of a week and just see if anything changed. What I was expecting was one of two things: either it wouldn’t work at all or it would be an easy way to make myself feel better quickly. Neither of those things were the case.

Instead, I realised that it was helping me build up resilience against stress by giving me a few minutes of real peace each day. I was sleeping better because my mind wouldn’t be racing as I’m lying in bed, and when I would meditate in the morning I’d be approaching my work day from a point of peace. I would still get stressed, that's only natural, but because I’d given myself a moment to unload stresses from the day before I was able to cope. It's a lot like exercising in a way, because you’re building up strength and endurance with each session, improving your level of concentration bit-by-bit, and consistency is the most beneficial but most difficult part. I find daily meditations to be very difficult but equally as rewarding when I accomplish my goals. Of course, it seems easy to just sit down for ten minutes, but if you’re really trying to affect change in yourself through meditation it takes a level of discipline that I’m personally still working on. 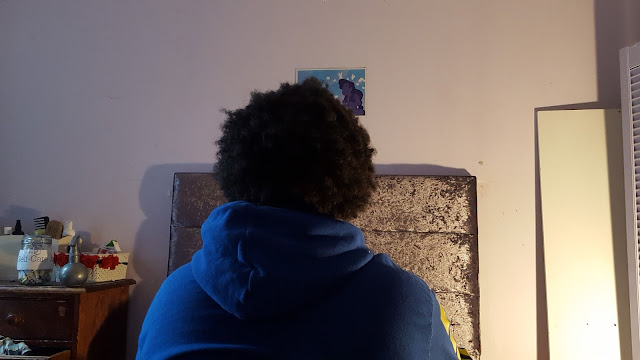 I’ve used both Headspace and Calm before to meditate, but I find that I like the variety and flexibility provided by calm much more, also a limited version of Calm can be used for free but this isn’t the case with Headspace. However, if you prefer more structure Headspace may be a better app for you. As I said, meditation requires discipline and Headspace forces you to go through a 10-step beginner’s phase to really get you into the habit, whereas Calm allows you to pick and choose where you start immediately which for me is freeing but for others could be overwhelming.
Labels: anxiety Avoidance contemplation Meditation panic panic attacks