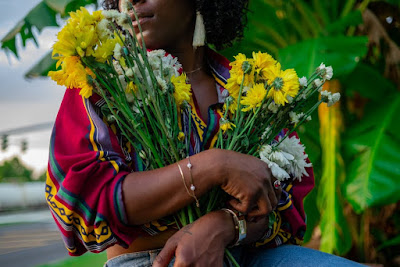 There wasn't exactly a reason why I did it the first time. My mum had received lots and lots of flowers for her birthday and she wasn't quite sure what to do with so many. I bought myself a cheap vase and put some of them in my room because they smelled wonderful, particularly the daffodils. As time went on I found that they brightened up my room, they made me want to keep it clean and clear so they would look well presented, and I would take the time to smell them whenever I came in.

After they eventually died, I saw another bouquet of daffodils in my local Tesco that were reduced so I bought them for myself as well.

Then, I was in Liverpool Street the other week on my day off just for a change of pace, and I walked past a flower stall. Some of them were so beautiful, and that's not something I really think about when I'm in the middle of busy, bustling London. I think, because I was going out with the idea of just enjoying the day, I allowed myself to be captivated by little bits of magic throughout the day.

I noticed how pretty they were  how surprisingly inexpensive they were, and decided I would treat myself to them on my way back home. I don't remember what kind of flowers they were but they were small and purple and, again, they smelled wonderful.

I'm now sitting in bed across from that same cheap vase full of vibrant (and thankfully also cheap - praise Lidl) red roses and they make me so happy when I look up at them. They're sort of gothic, romantic, Beauty and the Beast, Alice in Wonderland; they are cliché in the best way possible. Flowers are in general, I think, because it's so easy to tie meaning, memories, and sentiments to them. 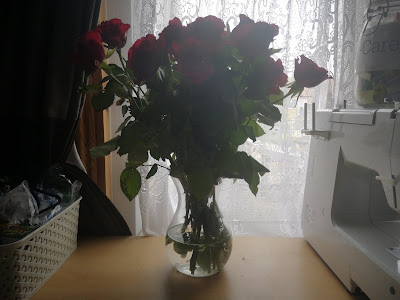 I've only ever been bought flowers once by a romantic partner. I must have been sixteen or seventeen years old, and I don't know what type they were but I think they were blue. It was the thoughtfulness that made me happy in that moment, that someone would take the time to make a romantic gesture. A proper one, like the sort I would read about in books. That same ex-boyfriend bought my mum a single red rose on Valentine's Day and she still brings it up to this day.

I caught a yellow rose at a Hobo Johnson concert at the beginning of this year, and it set off the beginning of the year for me with so much magic. It was like an oddly romantic gesture, I thought, throwing roses to the crowd instead of the other way around. Sealed in my feelings about an artist I was already falling in love with. 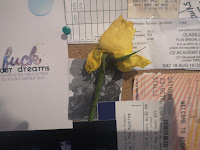 Flowers, and thoughtfulness behind getting them for someone, can be really impactful for many people. I used to just think it was a trite gesture but now I can see and appreciate why it became so trite - it's lovely having someone give you flowers. They can carry a lot of thought and meaning with them.

So, I've started to buy myself flowers, and before they die I will take one flower and press it so I can remember it. I'm romancing myself in a weird way, I suppose? It's an act of kindness and consideration towards myself, so I remember to be kind and considerate to myself.

I find that I have to remind myself to do these things a lot because it's not in my nature to be kind to myself. I wouldn't call this self-care per se, it's kind of an indulgent way of teaching myself a lesson and something I'm lucky I have the privilege to be able to do. The broader action, however, of doing something every once and a while to treat yourself kindly and to remind yourself to do so more often is extremely necessary.

It could be a little indulgence, taking the time to pick out an outfit that makes you feel. Good or taking an extra bit of time in the morning to do your make-up. It could be anything really, but there is an enormous amount of value in doing things to make yourself smile. 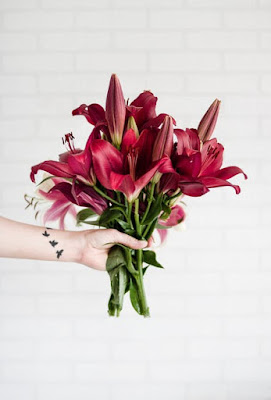