Today's post is inspired by this Twitter thread of questions for cisgender people to ask themselves about their gender identity, written by game dev Heather Flowers. 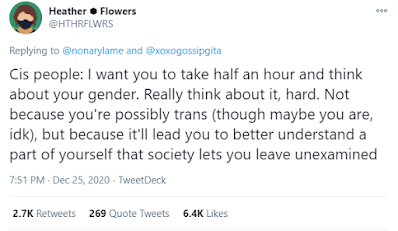 For those who may not know, the word 'cis' or 'cisgender' refers to someone whose gender identity and biological sex are a direct match, essentially the opposite of transgender. Part of the privilege that comes with being cisgender is never being challenged on why it is I identify as a woman and what aspects of my personality are influenced by my gender. It's a hard question to answer in any other way than "it just feels right". This list of questions felt like the perfect opportunity to ask myself thing I've never been forced to consider, in order to get a better understanding of who I am.
What better way to kick off 2021 than with a bit of self-discovery?

1. What do I enjoy about being my gender?

I am a cisgender woman, so I use she/her pronouns. As for what I enjoy about being a cis woman...this was the question that made me want to do a deep dive because I really, honestly don't know.
It just feels right. I am a woman and can't think of myself any other way. I don't think it's always been that way. In fact, I had a real battle with my gender identity growing up and rebelled against the idea of being "feminine" for a long time. We call it being a "tomboy" or whatever but in reality that is an exploration of your gender identity, we just give it a cute name to minimise its importance.

So, if I'm going to think of things I like about myself that are stereotypically feminine, I'd say that I like being a highly emotional, empathetic person. I think emotions are an important part of what makes us sentient and intelligent beings, and empathy is an extremely important part of healthy human communication.
I do want to acknowledge however, that empathy can be tricky for some people, whether they feel empathy to a debilitating degree or feel very little in comparison to a neurotypical person, and many of those people are able to manage. So I'm not saying that effective communication is impossible without access to a certain level of empathy, but I do think it can hinder you in a lot of social situations.

2. Why do I identify with my gender?

Again, the honest answer is that it just feels right. This is the gender that was assigned to me at birth, and for the past 28 years, it has never felt wrong. I've played with gender and gendered expectations, sometimes I like to dress in a more androgynous or even masculine way and I did so a lot as a teenager, but none of that ever took away from me feeling inherently female. This is a good question to ask yourself if you've ever had some confusion about what being a trans person means. Could you ever force yourself to truly feel like a gender that isn't yours? Of course not! How you feel is how you feel, and that is enough.

3. What gendered expectations do I put on myself? Do I enjoy those expectations? Why or why not?

I was raised in a Catholic, Ghanaian household as the only daughter and the eldest, and with that comes certain expectations about what a woman should be.
Everything kind of felt like wife training, to put it bluntly.
I was the one in the kitchen with mum more often than not, I had the most expected of me when it came to chores, how I spoke, how I sat, how I dressed, behaving "modestly" and so on. I got sick of it very quickly and spent a lot of time rebelling, but I still speak in a softer voice when I'm working or addressing my extended family, I still make sure I'm sitting with my legs crossed, I still feel awkward wearing clothes with cleavage showing, the list goes on. I'm so quiet and restrained outside that when I'm at home it all goes out the window, and I relax into a complete monster. We were always taught not to do things outside that would "reflect poorly" on our home, so I'm very secretive about my personal life to people I'm not close with and I'm very adept at code-switching.
Another really heinous habit I have is dumbing myself down in conversations, particularly with older men. I'll catch myself pretending not to have heard of something or just keeping quiet so the other person can explain it to me, it's weird. I was always encouraged to be intelligent and to be proud of that by my parents, but for whatever reason I feel awkward about it or like I'll be challenged until I'm wrong? I don't know. It's a work in progress but I'm determined to get over it.

4. What gendered expectations do I put on others? Why?

This is an excellent question because I'm sure I do this all the time but, it's so ingrained I probably don't even realize or think about it.

Something that I had to check myself on a few years back was the realization that I would judge girls for going to concerts in skirts. I never usually wear skirts or dresses to gigs, partially because I want to feel free to move around but mostly because growing up I heard a lot of horror stories about men in the crowds being gross and that scared the hell out of me. In reality, if someone has set their mind to go out and assault someone, what that person is wearing makes zero difference whatsoever but it's a sexist, victim-blaming idea I carried with me for a long time until I asked myself why.

I've also observed that I expect a lack of emotional intelligence from cisgender men as a default. I think that comes down to a lot of really frustrating "conversations" I've had in which I'm really, truly angry and upset but the guy is all smiles and thanking me for a "great debate" and I feel a little bit like I want to scream. Obviously, all men aren't like this, and while we as a society make empathy a gendered thing anyone is capable of it, but I have let a lot of negative experiences reinforce a stereotype and I shouldn't, really.

5. How do societal pressures affect my gender presentation?

As a child, and even now, when I think of the word "feminine" I think of adjectives like soft, pretty, delicate, slender, sweet, etc. I think of pink, cutesy, dolls, and all the other stereotypes that have never felt like they relate to me at all, which created a bit of a disconnect for me because while I've always felt female in both sex and gender identity my instinct is to reject the "ideal" of femininity because it never fit me.
There is a long conversation to be had on the defeminization of black women (especially those of us with darker skin) on top of the defeminization of fat women. Fat black women in mainstream media are permanently affixed with adjectives like 'loud', 'sassy', 'strong', 'aggressive', and in cultures across the world pale skin and femininity go hand in hand, therefore dark skin = masculine. If we are sexualized it's often in a degrading way, by men who are ashamed of finding us attractive, view us as a kink or a checkbox on their to-do list.
Needless to say, my physical appearance, and how people treat me because of those things, has a massive impact on my gender identity and how I perceive myself. Something in my head, fed by years of socialization, tells me that my looks make me less of a woman than someone smaller, skinnier, and lighter-skinned than me.
This is another place where my rebellion against being feminine came from. I hated the idea of being "ladylike" as a child and wanted to be friends with boys, I gravitated towards TV shows that weren't meant for girls, despised pink, refused bras for as long as I could, stopped wearing skirts and dresses, and swore I'd never ever touch makeup. I hated the idea of having to act a certain way or like certain things just because I was a girl and anyway those things weren't designed for dark, chubby, awkwardly tall little girls like me. They were meant for pretty people, and if I couldn't make people think of me as pretty I could at least make them think  I'm cool or weird or funny.
OK, this got too real, next question.

6. In what ways could I better feed my gender? What small things could I do in order to make it happy?

This exercise on its own has been so affirming for me, so I think I need to do more things that make me feel confident as a woman and reinforce my self-esteem. Dressing up on days where I don't feel like it, experimenting with the clothes I wear, and asking myself questions that challenge the negative ideas about myself. As I've got older I've been able to visit those feminine stereotypes in my own way and discover how "pink and girly" are things that I can be associated with if I want to, but on my own terms.

7. How do I visualize gender as a concept? What does my gender, in specific, look like?

I did an exercise at an event a couple years ago where you talked about your gender identity vs. the types of people you're attracted to and that was the first time I realised gender was a complicated subject for me, despite being confident in what my gender is.
I visualized it as a big clump of knotted thread, with things tangled in there like race, weight, height, age, hobbies, mental health and all these things inextricably linked to it and it was easier to leave it on the side rather than untangle it. I suppose this is part of the untangling process.
Phew. Thanks for reading! Please do read through the Twitter thread linked above and do a deep-dive into your own gender identity if you can, and a massive thanks to Heather for taking the time to write it all out.
It may be awkward and uncomfortable but you'll learn so much if it's something you've never had to consider before. Please let me know how it goes as well!
Labels: cisgender contemplation feminine femme gender Mental Health transgender wellness